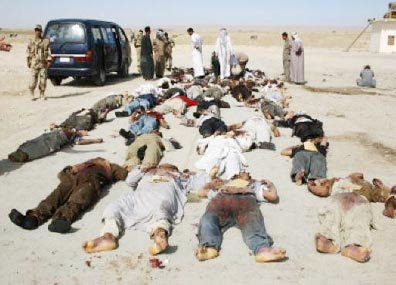 "......In reality, the violence is grossly understated. The Baker-Hamilton report by senior Republicans and Democrats, led by James Baker, took a single day last summer, when the US army reported 93 acts of violence in Iraq, and asked American intelligence to re-examine the evidence. They found the real figure was 1,100--the US military had deliberately understated the violence by factor of over 10.

Getting rid of Saddam Hussein was not going to be the main problem when the US and Britain invaded four years ago. His army would fall apart, as it had done in 1991 when he was expelled from Kuwait, because Iraqis simply would not fight for him. But the outcome of the invasion of 2003 was predictably different from the war in 1991, and not just because there is now a large American army in the heart of the Middle East, destabilizing the whole region. US forces had not pressed on to Baghdad 16 years ago, partly because Washington did not want to see Saddam replaced by Shia religious parties with possible links to Iran. That is exactly what has happened now, because 60 per cent of the Iraqi population is Shia.

Less predictable was the disaster facing ordinary Iraqis. Most wanted rid of Saddam Hussein because they expected a better life after his fall. Since they had oil reserves comparable to Saudi Arabia and Kuwait, Iraqis felt, why could they not have an equivalent standard of living to Saudis and Kuwaitis?......"
Posted by Tony at 8:02 AM