Where are the Laptop Bombardiers Now? 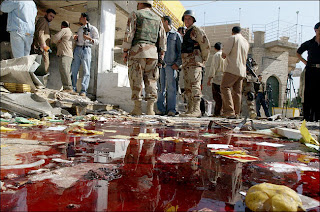 "Pick almost any date on the calendar and it'll turn out that the US either started a war, ended a war, perpetrated a massacre or sent its UN Ambassador into the Security Council to declare to issue an ultimatum. It's like driving across the American West. "Historic marker, 1 mile", the sign says. A minute later you pull over and find yourself standing on dead Indians. "On this spot, in 1879 Major T and a troop of US cavalry "

It's three o'clock in the afternoon, Sunday March 18, one day short of the anniversary of US planes embarking on an aerial hunt of Pancho Villa in 1916;of the day the U.S. Senate rejected (for the second time) the Treaty of Versailles in 1920; of the end of the active phase of the US invasion of Afghanistan in 2002; of the 10 pm broadcast March 19, 2003, by President G.W. Bush announcing that aerial operations against Iraq had commenced......

As Iraq began to plunge ever more rapidly into the abyss not long after the March, 2003 attack, this crowd stubbornly mostly stayed the course with Bush. "Thumpingly blind to the war's virtues" was the head on a Paul Berman op ed piece in February, 2004.Christopher Hitchens lurched regularly onto Hardball to hurl abuse at critics of the war.

But today, amid Iraq's dreadful death throes, where are the parlor warriors? Have those Iraqi exiles reconsidered their illusions, that all it would take was a brisk invasion and a new constitution, to put Iraq to rights? Have any of them, from Makiya through Hitchens to Berman and Berube had dark nights, asking themselves just how much responsibility they have for the heaps of dead in Iraq, for a plundered nation, for the American soldiers who died or were crippled in Iraq at their urging ? Sometimes I dream of them, -- Friedman, Hitchens, Berman -- like characters in a Beckett play, buried up to their necks in a rubbish dump on the edge of Baghdad, reciting their columns to each other as the local women turn over the corpses to see if one of them is her husband or her son.

Post coldwar Liberal interventionism came of age with the onslaught on Serbia. Liberal support for the attacks on Afghanistan and Iraq were the afterglows. Now that night has descended and illusions about the great crusade shattered for ever, let us tip our hats to those who opposed this war from the start ­ the real left, the libertarians and those without illusions about the "civilizing mission" of the great powers."
Posted by Tony at 10:39 AM