Saudi-Israeli Romance in the Air? 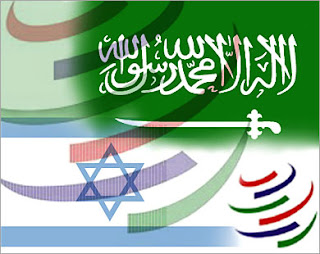 Israel to talk to Saudi Arabia?

"Washington: Will Israel meet with Saudi Arabia? According to a Friday report by the Washington Post, diplomats said that US Secretary Condaleezza Rice wants to initiate a multilateral meeting that would bring the two countries together.

A multilateral meeting of this sort would include the Quartet (the United States, the European Union, Russia and the United Nations), Israel, Palestinian President Mahmoud Abbas, and the so-called 'Arab Quartet' –Egypt, Jordan, Saudi Arabia and the United Arab Emirates – in a single meeting.

Such a meeting would bring together Israeli and Saudi officials formally for the first time since 2000. As of now, the Saudis refuse to meet publicly with Israeli officials.

Israel seems to be taking a similar stance: According to a recent 'Yedioth Aharonot' report, Prime Minister Ehud Olmert met with a senior Saudi official when visiting in the Jordanian capital of Amman. The prime minister denied this report....."
Posted by Tony at 12:30 PM