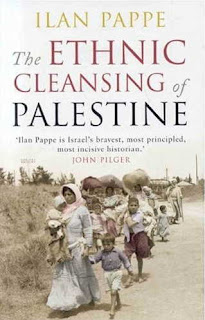 A Good Article Contributed by Datta

"Ilan Pappe deserves credit. He goes further than most Israelis in deconstructing the Jewish state’s historical revisionism, which he calls a “Zionist whitewash of words.” But does Pappe go far enough?

The iconoclastic Haifa University historian has written a book, The Ethnic Cleansing of Palestine, destroying the “Israeli foundational myth,” which he describes as a “sheer fabrication.” Pappe sets straight the Israeli historiography. Central to Zionist historical revisionism is Nakba (catastrophe) denial. Pappe affirms the occurrence of the Nakba which he states was not a “voluntary flight” but part of a Zionist blueprint (Plan Dalet) for the ethnic cleansing of Palestine. It was ethnic cleansing, but was it not also something more sinister?

Pappe identifies the perpetrators of the Nakba as the “heroes of the Jewish war of independence,” of who the best known is David Ben-Gurion, “the architect” of ethnic cleansing. Ben-Gurion is more accurately viewed as one of history’s vilest war criminals.

Pappe writes, “[C]ontrary to claims historians such as Benny Morris have made, Plan Dalet was handed down to the brigade officers not as vague guidelines, but as clear-cut operational orders for action.” The action resulted in the expulsion of almost 800,000 people and the destruction of 531 villages and 11 urban neighborhoods. Palestinian villages were literally wiped off the map by Zionists.

In addition to the ethnic cleansing and massacres, Pappe details the crimes committed by the Zionists against Palestinians: bioterror, imprisonment, abuses, ghettoization, rapes (Ben-Gurion was, perversely, informed of every case), looting, and desecration of religious sites.......

Pappe does go further than most Israeli intellectuals. He tackles the Nakba and the right of refugees to return. He decries the “horrific repression” of the Palestinians and understands how it helps provoke suicide bombings.

Pappe says the Zionists have a “siege mentality” about Arabs. He admits that Israeli Jews who support Palestinians are “few and far between.” Pappe faults the Zionist ideology and Zionists’ fear of a “demographic danger.” Even the Palestinians now in refugee camps are not safe from a future wave of ethnic cleansing warns Pappe, and those Palestinians living in Israel are in danger of “transfer.”.

He views Palestinians as moderate and forgiving for the most part and, therefore, believes there is a chance for reconciliation. But this requires atonement: “[U]nless Israel acknowledges the cardinal role it has played, and continues to play, in the dispossession of the Palestinian nation, and accepts the consequences this recognition of the ethnic cleansing implies, all attempts to solve the Israel-Palestine conflict are bound to fail.”

Pappe’s language sometimes betrays him. Why is it an “Israel-Palestine conflict”? It implies an equivalency between the two sides. There is no equivalency. It is a Zionist genocide perpetrated against Palestinians, abetted by much of the bystanding world. This is what it has always been and continues to be."
Posted by Tony at 6:38 PM