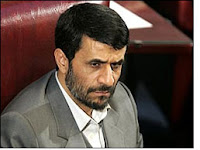 "......It didn’t take long for Cheney and the newly christened OIA to spawn the Iran-Syria Operations Group, designed “to encourage regime change in Iran,” that is to say covertly attack Iran.

“It’s no secret that Cheney has over $80 million at her disposal to promote democracy in Iran. But ISOG isn’t simply about promoting democracy. It’s about helping to craft official policy, doing so not with one but two countries in its sights, and creating a policymaking apparatus that parallels—and skirts—Foggy Bottom’s suspect Iran desk,” Lawrence F. Kaplan wrote last April for the New Republic Online. Of course, for the neocons, “democracy” translates into the sort of engineered chaos currently underway in Iraq—a social deconstruction on tap for the entire Muslim and Arab world.

As should be expected, Iran is threatening to respond in kind, undoubtedly to the glee of the neocons, who are of course on a pretext fishing expedition.

“Iran is threatening to retaliate in Europe for what it claims is a daring undercover operation by western intelligence services to kidnap senior officers in its Revolutionary Guard,” reports the Times Online. “According to Iranian sources, several officers have been abducted in the past three months and the United States has drawn up a list of other targets to be seized with the aim of destabilizing Tehran’s military command.”......

“One theory circulating in Israel is that a US taskforce known as the Iran Syria Policy and Operations Group (ISOG) is coordinating the campaign to take Revolutionary Guard commanders,” Mahnaimi continues. “The Iranians have also accused the United States of being behind an attack on Revolutionary Guards in Iran last month in which at least 17 were killed.”

Last month, a reputed “former high-ranking CIA official in Washington” told the Sunday Telegraph “America is secretly funding militant ethnic separatist groups [Kurds, Baluchis, Ahwazi Arabs, and Azeris] in Iran in an attempt to pile pressure on the Islamic regime to give up its nuclear program.”....

“Military analysts believe that Iranian threats of retaliation are credible. Tehran is notorious for settling scores. When the Israelis killed Abbas Mussawi, Hezbollah’s general secretary, in 1992 the Quds Force blew up the Israeli embassy in Argentina in revenge,” the Times Online concludes....."
Posted by Tony at 8:19 PM