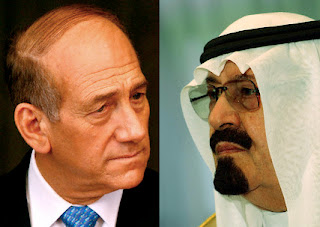 "The United States has quietly joined Israel in urging Arab leaders to reformulate their 2002 peace offer, in an effort to end the decades-long Middle East conflict, Arab diplomats said Thursday. But so far, some Arab heavyweights are publicly resisting the idea.

Three Arab diplomats in different Arab capitals said Washington has been pressing for changes to make the offer in line with the "road map," a peace plan supported by the United States and other members of the so-called Quartet group. That plan calls for a two-state solution to the conflict but falls short of specifying border lines for the proposed Palestinian state.

The American ideas were presented through different diplomatic channels, said the Arab diplomats, all speaking on condition of anonymity because they are not allowed to talk to the press....."

Finally, Saudi Arabia will say, "Jump!" and the Palestinian "leaders" will ask, "How high?"

But don't stop celebrating just yet, save some for Condoleezza when she arrives.
Posted by Tony at 7:55 PM