US struggles to avert Turkish intervention in northern Iraq 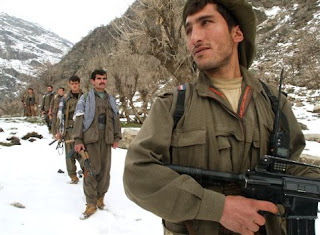 "The US is scrambling to head off a "disastrous" Turkish military intervention in Kurdish-controlled northern Iraq that threatens to derail the Baghdad security surge and open up a third front in the battle to save Iraq from disintegration.

Senior Bush administration officials have assured Turkey in recent days that US forces will increase efforts to root out Kurdistan Workers' party (PKK) guerrillas enjoying safe haven in the Qandil mountains, on the Iraq-Iran-Turkey border.

But Abdullah Gul, Turkey's foreign minister, MPs, military chiefs and diplomats say up to 3,800 PKK fighters are preparing for attacks in south-east Turkey — and Turkey is ready to hit back if the Americans fail to act. "We will do what we have to do, we will do what is necessary. Nothing is ruled out," Mr Gul said......

The firm Turkish belief that the US is playing a double game in northern Iraq. Officials say the CIA is covertly funding and arming the PKK's sister organisation, the Iran-based Kurdistan Free Life party, to destabilise the Iranian government.

US acquiescence in plans to hold a referendum in oil-rich Kirkuk in northern Iraq. Turkey suspects Iraqi Kurds are seeking control of Kirkuk as a prelude to the creation of an independent Kurdistan......

US support for Iranian Kurds opposed to the Tehran government is adding to the agitation. "The US is trying to undermine the Iran regime, using the Kurds like it is using the MEK [the anti-Tehran People's Mujahideen]," said Dr Logoglu. "Once you begin to differentiate between 'good' and 'bad' terrorist organisations, then you lose the war on terror." But he warned that military intervention might be ineffective and could be "disastrous" in destabilising the region....."
Posted by Tony at 7:37 PM