The Pelosi-crats and the War 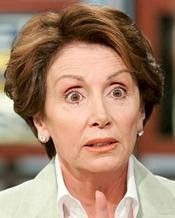 "The times, they sure are a changin.' Why, it seems like only yesterday – although it was December 16, 1998 – that Nancy Pelosi opined:

"As a member of the House Intelligence Committee, I am keenly aware that the proliferation of chemical and biological weapons is an issue of grave importance to all nations. Saddam Hussein has been engaged in the development of weapons of mass destruction technology which is a threat to countries in the region and he has made a mockery of the weapons inspection process."

Today, however, she's singing a different tune: "There was never anything in the intelligence that said Iraq posed an imminent threat to the United States, never."

When Bush launched the war, both the Senate and House adopted resolutions ostensibly to "support the troops," but in reality endorsing the war, the bombing, and the policies of the Bush administration. The Senate voted 99-to-nothing for a resolution that "commends and supports the efforts and leadership of the President, as Commander in Chief, in the conflict against Iraq."......."
Posted by Tony at 5:01 AM