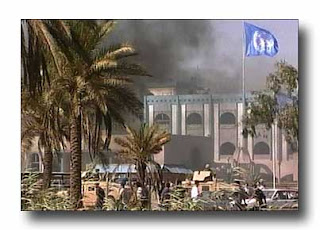 Bomb Goes Off Within Yards of UN Chief in Baghdad

"A rocket or mortar bomb exploded 50 yards from the UN secretary general, Ban Ki-moon, as he was telling reporters in Baghdad that he was thinking of boosting the UN presence in Iraq because of improved security.

A startled looking Mr Ban ducked as if for cover behind the artificial flowers decorating the podium as the roar of the explosion reverberated through the hall where he was giving a press conference, standing beside Iraq's Prime Minister, Nouri al-Maliki.

It was Mr Ban's first visit to Iraq and like all other visits by senior international dignitaries to the Iraqi capital it was a "surprise", in a bid to get in and out of the country before insurgents could react.

In Mr Ban's case their response was immediate and highly accurate: the blast was close enough to the conference hall to bring down pieces of debris from the ceiling while outside it slightly wounded two security guards.

Iraqi officials were reassuring. "This was not a security breach," said the Interior Minister, Jawad Bolani. "Things like this happen in Baghdad once or twice a week." In reality, they happen every few hours outside the Green Zone, which few government ministers ever leave. The zone itself comes under regular mortar fire and is sometimes hit by Katyusha rockets, a favourite spot for launching them being the Dohra area in southern Baghdad.

The incident is the most embarassing conclusion to an official visit since Paul Wolfowitz, then US deputy Defence Secretary, was sent running in his pyjamas down a smoke-filled stair well from his suite in the nearby al-Rashid hotel in November 2003, after it was hit by a barrage of rockets that killed an American colonel. He had been conducting a tour of Iraq, making optimistic statements about the success of the US occupation.

Mr Ban had just committed himself to praising Mr Maliki's "strong leadership" and added: "As we see the improved situation on the ground, I am considering an increase in the presence of the United Nations."
The UN pulled out of Iraq after a truck bomb exploded close to its Baghdad headquarters in August 2003, killing its chief envoy to the country, Sergio Vieira de Mello, and 21 others.

It has apparently been a tactic of the insurgents to make sure that any potential foreign allies of the US or the Iraqi government are singled out for immediate attack. Presumably, Mr Ban will now think again about sending more UN personel to Baghdad....."
Posted by Tony at 9:17 AM