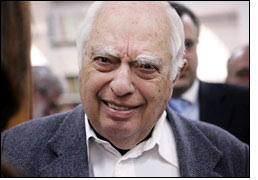 "Last week Jacob Weisberg, writing for Slate, took on the octogenarian Bernard Lewis, the neocon “Orientalist,” for his praise of the Crusades and his criticism of John Paul II’s apology for that mostly forgotten historical event. Lewis made the comments at the American Enterprise Institute’s “annual black-tie gala at the Washington Hilton,” where the elder neocon guru received the Irving Kristol Award, sort of like receiving an award from Hans Fritzsche, head of the Drahtloser Dienst, the Nazi wireless propaganda service. Fritzsche was charged with conspiracy to commit crimes against peace, war crimes, and crimes against humanity at Nuremberg, charges neither Lewis nor Kristol will likely ever face, as here in America we honor our war criminals and shower them with tribute.

Lewis, writes Weisberg, is “perhaps the most significant intellectual influence behind the invasion of Iraq,” that is to say he served as inspiration for the premeditated slaughter of around 700,000 Iraqis. “In his address, the 90-year-old Lewis did not revisit his argument that regime change in Iraq would provide the jolt needed to modernize the Middle East. Instead, he spoke at length about the millennial struggle between Christianity and Islam,” much to the delight of the gathered neocons. “Here were the theorists of the invasion of Iraq, many of them also Jewish, applauding the notion that the Crusades were not so terrible and embracing a time horizon that makes it impossible to judge them wrong,” Weisberg continues. “And here was the clubhouse of the neocons throwing itself a lavish ‘do, when the biggest question in American politics is how to escape the hole they’ve dug. Reality seemed to have taken up residence elsewhere for the evening.”.....

For some reason, Mr. Weisberg has neglected to mention that Condi Rice now has as her trusted consigliere “the most influential neoconservative in academe,” Eliot Cohen. Weisberg would have us believe there is a yawning divide between the neocons and the “realist school” neolibs, an impression dashed upon a cursory examination of the company Mr. Cohen keeps: Henry Kissinger, James Schlesinger, and other neolib riffraff in addition to the usual neocon suspects at the Project for the New American Century (Cohen is a founding signatory of this criminal organization) and the American Enterprise Institute, where Bush gets his “minds.” Of course, the difference between neolibs and their neocon kissing cousins is but cosmetic, as the latter prefer shock and awe mass murder while the former engage in medieval sanctions of the sort that resulted in 1.5 million dead Iraqis, 500,000 of them children, a record the neocons are working hard to beat.

As Scott Thompson and Jeffrey Steinberg note, during “the Carter Administration, Lewis was the architect of madman Zbigniew Brzezinski’s ‘Arc of Crisis’ policy of fomenting Muslim Brotherhood fundamentalist insurrections all along the southern tier of the Soviet Union. The planned fostering of radical Islamist war provocations was known, at the time, as ‘the Bernard Lewis Plan,’” a plan resulting in the creation of “al-Qaeda,” the intelligence fabrication now said to be once again sprouting up like toxic weeds in “failed states” awaiting action on the shock and awe roster. “In 1992, in the aftermath of the Persian Gulf War, Lewis celebrated in the pages of the New York Council on Foreign Relations’ Foreign Affairs that the era of the nation-state in the Middle East had come to an inglorious end, and the entire region should expect to go through a prolonged period of ‘Lebanonization’—i.e., degeneration into fratricidal, parochialist violence and chaos.”

This “degeneration into fratricidal, parochialist violence and chaos” is well underway and, regardless of Jacob Weisberg’s observations while in attendance at the AEI blood sport “gala” in Washington, will continue, minus the former cast, now taking up residence at the World Bank and the Edmund A. Walsh School of Foreign Service at Georgetown University, as war criminals are rewarded handsomely in America, as evidenced by the fact Henry Kissinger is still walking around and Bush Senior and Bill Clinton are cherished as masters of statecraft, that is to say they are seasoned mass murderers making Charlie Manson look like little more than a dismissible enfant terrible."
Posted by Tony at 10:22 AM