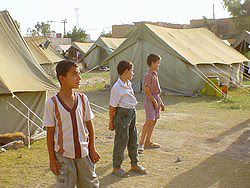 "BAGHDAD, 18 March 2007 (IRIN) - The United Nations has reiterated its call for the protection of Palestinian refugees in Iraq after Iraqi security forces killed one and detained dozens in raids last week, causing a number of Palestinian families to flee to the border.

“One Palestinian, [who was] a guard at a mosque, was killed with at least one gunshot to the head during the raid on Wednesday,” said Ron Redmond, chief spokesman for the UN High Commissioner for Refugees (UNHCR), told reporters in Geneva on Friday. The agency called for the immediate protection of Palestinians in Iraq......

Dalil al-Qusous, the Palestinian Charge d’Affaires in Baghdad, said Iraqi security forces caused “fear and awe” among Palestinians in their raid. He called for the “immediate release of the innocent Palestinian detainees”......

UNHCR’s Redmond said that the raid prompted at least 41 Palestinians to flee the capital and join 850 of their compatriots who have been stranded on the Iraq-Syria border since last May. More were expected to be on their way, he said.

He added that he was concerned for the safety of NGOs working with Palestinians. On 13 March, one NGO staff member dealing with the Palestinian community was abducted in front of his son by unknown men and was found dead the next day, Redmond said.....

Palestinians, many of whom fled to Iraq from the newly created Israel in 1948, were treated well under the government of the deceased former Iraqi president Saddam Hussein, causing some Iraqis to resent them.

UNHCR said at least 186 Palestinians were murdered in Baghdad between April 2004 and January 2007, while about 15,000 Palestinians remain in Iraq, less than half the number who had lived there previously.

“We are being killed every day and the whole world is motionless. What have we done to live with this ordeal?” a Palestinian refugee told IRIN in a phone interview from his home on condition of anonymity as he feared reprisals.....

Andrew Harper, head of UNHCR’s Iraq Support Unit, said Palestinians are “particularly targeted, not protected and have nowhere to flee to. How much more will have to happen before the international community and the countries in the region respond positively to calls to have Palestinians relocated out of Iraq?”...."
Posted by Tony at 10:49 AM