In Memory of Tanya Reinhart 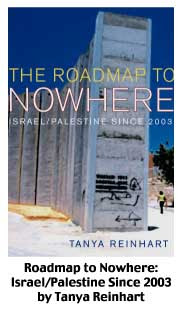 She Drew Away the Veil on Criminal and Outrageous Conduct

Editors' note: We have lost an outstanding intellect and one of the bravest voices from Israel with the death of Tanya Reinhart. Last October, on this site, we published Eric Hazan's interview with Tanya Reinhart on the occasion of the publication of her latest book, Roadmap to Nowhere. In conclusion Haas asked her, Despite the grim events described in the book, the overall feeling that comes through is that of hope. Why?........

".....But Tanya's outstanding professional work was only one part of her life, and of our long and intimate friendship. She was one of the most courageous and honorable defenders of human rights whom I have ever been privileged to meet. As all honest people should, she focused her attention and energy on the actions of her own state and society, for which she shared responsibility ­ including the responsibility, which she never shirked, to expose crimes of state and to defend the victims of repression, violence, and conquest.

Her numerous articles and books drew away the veil that concealed criminal and outrageous actions, and shone a searing light on the reality that was obscured, all of immense value to those who sought to understand and to react in a decent way. Her activism was not limited to words, important as these were. She was on the front line of direct resistance to intolerable actions, an organizer and a participant, a stance that one cannot respect too highly. She will be remembered not only as a resolute and honorable defender of the rights of Palestinians, but also as one of those who have struggled to defend the moral integrity of her own Israeli society, and its hope for decent survival.

Tanya's passing is a terrible loss, not only to her family and those fortunate enough to come to know her personally, and to those she defended and protected with such dedication and courage, but to everyone concerned with freedom, justice, and an honorable peace."--- Noam Chomsky
Posted by Tony at 8:08 AM