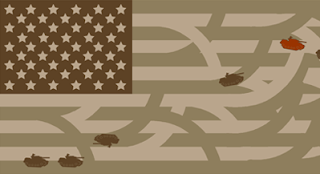 ".......Sadly, Congress’ smoke-and-mirrors approach to the Iraq war creates the impression of much activity while generating no result. Even more sadly, the majority of Americans are falling for the act, either by continuing their past trend of political disengagement or by thinking that the gesticulation and pontification taking place in Washington, D.C., actually translate into useful work. The fact is, most Americans are ill-placed intellectually, either through genuine ignorance, a lack of curiosity or a combination of both, to judge for themselves the efficacy of congressional behavior when it comes to Iraq. Congress claims to be searching for a solution to Iraq, and many Americans simply accept that this is this case.

The fact is one cannot begin to search for a solution to a problem that has yet to be accurately defined. We speak of “surges,” “stability” and “funding” as if these terms come close to addressing the real problems faced in Iraq. There is widespread recognition among members of Congress and the American people that there is civil unrest in Iraq today, with Iraqi-on-Iraqi violence tearing that country apart, but the depth of analysis rarely goes beyond that obvious statement of fact. Americans might be able to nod their heads knowingly if one utters the words Sunni, Shiite and Kurd, but very few could take the conversation much further down the path of genuine comprehension regarding the interrelationships among these three groups. And yet we, the people, are expected to be able to hold to account those whom we elected to represent us in higher office, those making the decisions regarding the war in Iraq. How can the ignorant accomplish this task? And ignorance is not something uniquely attached to the American public. Rep. Silvestre Reyes, the newly appointed chairman of the House Intelligence Committee, infamously failed a pop quiz in which journalist Jeff Stein asked him to differentiate between Sunni and Shiite. Reyes has become the poster boy for congressional stupidity, but in truth he is not alone. Very few of his colleagues could pass the test, truth be told......

The longer the Americans remain in Iraq, the more violence the Americans bring down on Iraq, and the more the Americans are seen as facilitating the persecution of the Sunnis by the Shiites, the more legitimate the call of the Wahhabi fanatics become. While American strategists may speak of the rise of al-Qaida in Iraq, this is misrecognition of what is really happening. Rather than foreigners arriving and spreading Wahhabism in Iraq, the virulent sect of Islamic fundamentalism is spreading on its own volition, assisted by the incompetence and brutality of an American occupation completely ignorant of the reality of the land and people it occupies. This is the true significance of Baghdad, and any answer not reflecting this will be graded as failing.

A pop quiz, consisting of one question in two parts. Most readers might complain that it is not realistic to expect mainstream America to possess the knowledge necessary to achieve the level of comprehension required to pass this quiz. I agree. However, since the mission of the United States in Iraq has shifted from disarming Saddam to installing democracy to creating stability, I think it only fair that the American people be asked about those elements that are most relevant to the issue, namely the Shiite and Sunni faithful and how they interact with one another.

It is sadly misguided to believe that surging an additional 20,000 U.S. troops into Baghdad and western Iraq will even come close to redressing the issues raised in this article. And if you concur that the reality of Iraq is far too complicated to be understood by the average American, yet alone cured by the dispatch of additional troops, then we have a collective responsibility to ask what the hell we are doing in that country to begin with. If this doesn’t represent a clarion call for bringing our men and women home, nothing does. "
Posted by Tony at 9:43 AM