Open letter to the anti-war movement 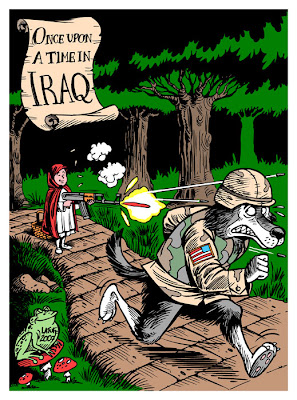 The national popular resistance in Iraq, in defending the whole of humanity against a culture of force, deserves our recognition and support.

"The illegal invasion and destruction of Iraq is not only the biggest crime of recent history, it is the original sin of the 21st century, a depravity. In its war on Iraq, the United States has sought to destroy Iraq as both a state and a nation. It decimated an entire class — the progressive middle class of Iraq that had proven its capacity to manage Iraqi resources independently and to the benefit of all; it killed nearly a million while sending millions more into exile; it orchestrated death squads and looting and invented new horrors in torture and rape; in the name of bringing democracy, it brought material destruction on a mass scale to a people, aiming also to erase their identity, memory, culture, social fabric, institutions and forms of administration, commerce, and everyday life; it even attacked Iraq’s unborn generations with the 4.7 billion-year death of depleted uranium. It has engaged in civilisational genocide as well as its own moral suicide. Force, however, does not dictate right. The brutality of power and imperialism has been definitively exposed while the project for a new American century has utterly failed. The consequences for American and international history are conclusive. The world order that formed around erstwhile US liberal values has evaporated.......

We should support the call of Tun Dr Mahatir Mohammed to criminalise war as a means of resolving disputes among nations. We should support this call not only because war is a crime, but also because war again has been proven useless. Iraq cannot be broken and cannot be subjugated. The defeat of the United States and the occupation should be a lesson; that never again a military force tries to subjugate the people of another country. The US did not and cannot achieve its goals, even if it exterminates whole sections of Iraqi society. To succeed in stopping this insanity, the anti-war movement must revise all its terminology and refuse the terms dictated by the occupation. We must condemn the ignorance that accepts the dehumanising of the other. We must refuse the word “insurgency” and substitute it for what exists in reality: legitimate and legal resistance against vicious foreign occupation. Occupation is a de facto condition, not a de jure determination. With around 200,000 foreign forces on Iraqi soil, Iraq cannot be but described as an occupied country. Detainees in Iraq should thus be considered prisoners of war, with all the protected rights the Third Geneva Convention assures them.

We ought all to be humbled by the losses this people has been prepared to endure for our sake and demand the complete, unconditional and immediate withdrawal of occupation forces from Iraqi soil, along with the cancellation of any law, treaty, agreement or contract passed under occupation and the fair payment of reparations and compensations for the tragic human and material loses the Iraqis have suffered in defence of civilisation. We must refuse in total the culture of the military-imperial state if we are to contribute to the wave of resistance rising worldwide in defence of civilisation, justice, independence and coexistence. We must retrieve recognition from any entity imposed by the United States and that claims to represent the people of Iraq. Long live the Iraqi people and its sole representative, the Iraqi Resistance."
Posted by Tony at 8:21 AM