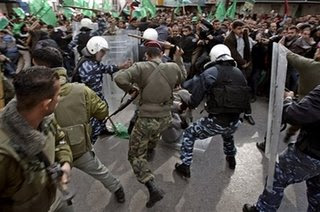 "With Iranian help, Hamas forces are expanding fast and getting more sophisticated weapons and training than do those under Palestinian President Mahmoud Abbas' control, according to the U.S. security coordinator.

Dayton delivered his assessment in a series of closed-door briefings late last week to congressional leaders and staff, sources familiar with the discussions said on Wednesday.

Concerned about Abbas' coalition government with Hamas, a group that Washington considers a terrorist organization, the U.S. Congress has blocked $86 million in U.S. funding to bolster Abbas' presidential guard and national security forces.

It is unclear if and when the money will be approved.

Palestinians hope a unity government formed on Saturday between Abbas' secular Fatah faction and Hamas Islamists will bring an end to fighting between the groups. But tensions remain high, especially in the Gaza Strip.

Over objections from Fatah, Hamas is pushing ahead with plans to double the size of its Executive Force to 12,000 members. The force is built mostly from members of Hamas' armed wing, which on Monday carried out its first attacks against Israelis since a shaky Gaza truce took effect in November.

The U.S. wants Abbas' own forces to be strong enough to maintain law and order, and to prevent militant groups like Hamas from firing rockets and launching other attacks on Israel from the Gaza Strip.

But in fierce fighting before Abbas agreed to join the unity government, Hamas' Executive Force and armed wing were beating their Fatah rivals, Dayton said, according to two sources familiar with his comments.

Dayton, who became U.S. security coordinator between Israel and the Palestinians in December 2005, said Hamas has continued to build up its forces using Iranian funds and equipment.

He added that Abbas' troops will not be strong enough to confront them without outside assistance.

Israeli officials have likewise said that Hamas fighters are receiving training in Iran and smuggling into Gaza rockets that could penetrate deep into Israeli territory.

Despite the U.S. funding embargo, Palestinian officials and Western diplomats say Abbas has continued to expand his own forces.

The presidential guard recently set up a camp near the Karni commercial crossing in Gaza, and it is finishing construction of a larger training base in the West Bank city of Jericho."

I wonder how long the "unity" will last; don't stop celebrating yet and keep sending your congratulations to Habila.
Posted by Tony at 5:50 AM