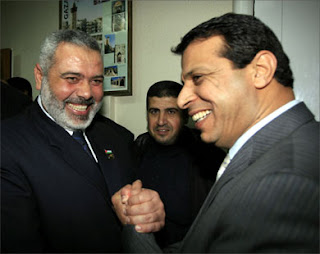 "Hamas, in its first public rift with Fatah since forming a Palestinian unity government, on Monday accused Palestinian Authority Chairman Mahmoud Abbas of illegally appointing one of the Islamist group's long-time foes as his national security adviser.

"Hamas sees the step by President Mahmoud Abbas to appoint
Mohammad Dahlan, a lawmaker, as his adviser for the national security as a violation of Palestinian law," Hamas said in a statement. "We urge President Abbas to go back to the law and to examine the decision accordingly."

Dahlan was appointed to lead the newly re-established Palestinian National Security Council, which is intended in theory to oversee all security services in the Palestinian territories.

Abbas' decision to create the PNSC and appoint Dahlan as national security adviser are seen as an attempt by the PA chair to tighten his control over the various Palestinian security forces.

Dahlan said Sunday that the move was aimed at achieving a united force that would carry out the strategy set by the council. He hinted that there are no plans to dismantle the Executive Force Hamas created in Gaza. "We will start with the most pressing issues," Dahlan said. "As long as the Executive Force is not acting illegally, we will examine our priorities.""