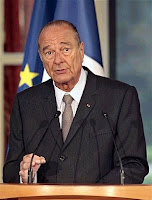 "French President Jacques Chirac told Israel at the start of the war in Lebanon that France would support an Israeli assault on Syria, it was reported on Sunday.

Army Radio reported that in the message, which was delivered by Chirac to Israel via a secret channel, the French president suggested that Israel invade Damascus and topple the regime of Bashar Assad. In exchange, Chirac assured Israel full French support for the war.

According to the message delivered from Paris, Syria was responsible for the flare up in the North and encouraged Hizbullah to attack.

"Former prime minister Ariel Sharon had explained to the French in the past that Iran is the main one responsible for Hizbullah's armament in Lebanon, while Chirac saw Syria as the primary one responsible for the matter," former Israeli ambassador to France Nissim Zvilli told Army Radio in an interview.

In March of last year, some four months before the war began, Chirac warned Syria that the international community would respond harshly to any attempt to destabilize Lebanon.

During the war, France was one of the foremost proponents of sending a multinational UNIFIL force to police the Israel-Lebanon border, and even offered to lead it.

Towards the end of the war, however, diplomatic officials said France had changed its mind out of concern that its badly strained relations with Syria would lead Hizbullah to target French soldiers.

France, the officials pointed out, was instrumental in pushing through UN Security Council Resolution 1559, which forced Syria out of Lebanon. In addition, it was a key force behind the establishment of the commission of inquiry into the assassination of Hariri, who was a personal friend of Chirac. "
Posted by Tony at 5:11 PM