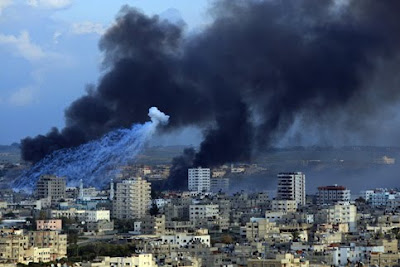 "02/01/2011 Israel's army chief told a US Congress delegation in late 2009 he was preparing for a large war in the Middle East, probably against Hamas or Hezbollah, leaked US diplomatic cables showed Sunday.

"I am preparing the Israeli army for a large scale war, since it is easier to scale down to a smaller operation than to do the opposite," Lieutenant General Gabi Ashkenazi was quoted as saying in a cable from the US embassy in Tel Aviv.

The document, dated November 15, 2009, was quoted Sunday in Norwegian by Oslo-based daily Aftenposten, which said it had obtained WikiLeaks' entire cache of 251,187 leaked US embassy cables.

"The rocket threat against Israel is more serious than ever. That is why Israel is putting such emphasis on rocket defence," Ashkenazi told the US delegation led by Democrat Ike Skelton, the cable showed.

Ashkenazi is also quoted saying Israel next time will not accept "any restrictions on warfare in populated areas," and insisted the occupation army had allegedly never intentionally attacked civilian targets."
Posted by Tony at 7:41 AM