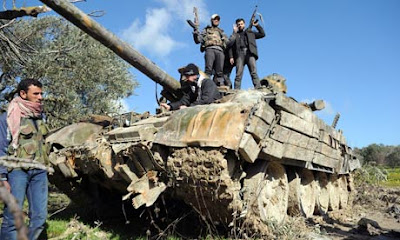 "...... Abu Mohammed, now a senior member of the rebel movement in the north of the country, broke the glass. What followed, he said, were the most puzzling 10 minutes of his military career.
"I shattered the glass and answered the phone," he said. "There was a brigadier on the other end from the strategic air command in Damascus. He said: 'There are enemy planes approaching, you are not to do anything.'
"I was confused. Do nothing? This is what we were waiting for. We couldn't see them on our radars. And then our radars were jammed. The missile base nearby could not have fired even if it was allowed."


Until last week, the Israeli raid in 2007 that destroyed what the International Atomic Energy Agency concluded was a nuclear reactor at al-Kibbar, north of Deir Azzor, was the last time Syria's much-vaunted air defence system was tested.
But last Wednesday just before dawn, the Israeli planes returned.......

Nearly two withering years of war have clearly taken a toll on the Syrian military, which before the insurrection was reputed to be one of the region's most powerful. Army bases were considered impregnable, air defences the most formidable in the region, and soldiers resolutely loyal.
"The only thing we really still fear is the Migs," said Maalik Sayedi, a carpenter turned guerrilla fighter, as he picked through the remains of an overrun infantry school on the northern outskirts of Aleppo. "When we raided this place, the fight was over in less than two hours."........

"We thought they were strong. But the veil has been lifted. Fear was the regime's greatest weapon. Without that, we can match them," he said, before stopping in mid sentence as a distant roar drew nearer.
"Except for the planes," he added....."
Posted by Tony at 4:20 PM