‘Why is the world doing nothing?’ – cluster bomb attack by the Syrian army in Aleppo 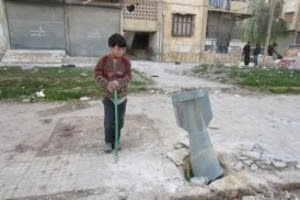 "......These children are some of the victims of a multiple cluster bomb attack launched on the morning of Friday 1 March against a densely populated residential housing estate in Aleppo.

The attack killed at least 19 and injured more than 60 – we won’t know the final death and injury toll for some days, as some families fled the area for fear of further attacks. The more seriously injured were evacuated to hospitals in Turkey and the rest are being treated in various field hospitals around the city. Many of the victims were children who were playing in the alleys and gardens of the housing estate.
The attack took place at about 11.30am. I arrived in Aleppo shortly after and went to the area – the Masaken Hanano district, to the east of the city centre. It was much worse than initial reports suggested.

I also found unexploded cluster submunitions (bomblets) all over the place: on the roofs of buildings; on the pavements and in the alleys and gardens between the buildings. Members of armed opposition groups who control the area rapidly filled a sack with the unexploded bomblets that were left lying around. The buildings’ walls were peppered with shrapnel, and here and there are holes where the lethal bomblets penetrated the walls, exploding inside people’s homes......"