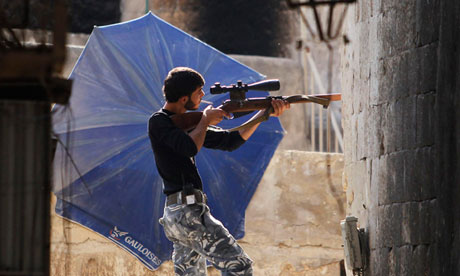 "When Barack Obama vowed to attack Bashar al-Assad, several thousand jihadists on the plains of northern Syria knew exactly what to do. Ever since, they have been hiding their big guns, evacuating bases, parking cars in cow sheds and spreading themselves thin among farms, factories and the communities that reluctantly host them.
"We have learned the lessons from Iraq," said Abu Ismail, a leader of the main jihadist group in the north-east of the country, known to some now as the Islamic state of Iraq and Syria (ISIS). "Iraq has made us better fighters."
While Syria's mainstream rebels are enthusiastically welcoming talk of an American attack as a chance to break the stalemate, the jihadist groups among them see things through a very different prism, in which my enemy's enemy is not necessarily my friend.
All across the north, al-Qaida and its affiliates are on a war footing; a rank and file convinced that an old foe is coming their way and that if and when the US air force does attack, they will have little trouble staying out of its way.
"There are many among us [who] fought in Iraq and Afghanistan," said a second jihadist, a 26-year-old softly spoken Saudi, who called himself Abu Abid. "Our emir knows how to deal with them. And all know that while the Americans say they want to attack the regime, we are their real enemy."......"
Posted by Tony at 4:45 AM