Both men like to crush dissent and have little time for diplomatic norms – but while the Russian president plays chess with the world, his counterpart just plays 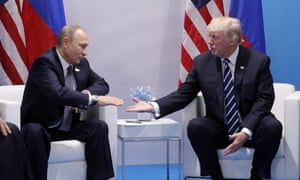 As they leaned deeply towards one another in Hamburg, it was all too easy to see and hear the similarities between Donald Trump and Vladimir Putin. Trump said it was “an honor” to be with Putin, who gushed that he was “delighted to meet” Trump.
“We look forward to a lot of very positive things happening for Russia and for the United States and for everybody concerned,” Trump offered. You can only wonder at the scale of conservative outrage if Barack Obama had hoped first for Russian happiness, and second for American success.
“America first” takes second place when Vladimir is sitting close to Donald.
“We spoke over the phone with you several times,” Putin replied. “But phone conversations are never enough, definitely.” How true. In any long-distance relationship, you need something more physical to make it real. Along with a team of collaborators with curiously close ties throughout a big election and its aftermath.

Read more
It’s tempting to think that Trump and Putin are cut from the same cloth.
They both like to style themselves as strongmen, crushing dissent and critics with varying degrees of violence. Trump encouraged his supporters to get into fistfights with protesters, and seems to fantasize about doing the same to CNN. Putin appears to prefer a more deadly and inventive approach that includes bullets and polonium.
They both pride themselves on their physical prowess, whether real or imagined, and go to unusual lengths to establish superior status over rival leaders in one-on-one meetings. Putin brought his giant hound to his first meeting with Angela Merkel, who had been attacked by a dog and was known to be afraid of them. Trump believes he can literally jerk people aroundwith a few handshakes.
They both consider themselves devastatingly attractive to the opposite sex. Putin may have taken the Berlusconi path of plastic surgery to enhance his already irresistible charms. Trump has constructed an architectural gem on top of his cranium to pretend like he still has a head of hair.
They both have little time for international norms of diplomacy and statecraft, preferring to stand outside the western consensus to strike a nationalist pose. Trump seems determined to trash the global trade system and the European Union, and is ambivalent about Nato. Putin would be happy trashing all three. And for some reason they both like to push around poor little Montenegro.
They both see little distinction between their national interests and their personal business interests. Trump claims he is the most ethical president ever. At the same time, he also claims to be the president with the most complicated commercial ties that cannot reasonably be revealed or unwound. Putin has had a few years to perfect this business and political model, and may just be one of the world’s wealthiest men. 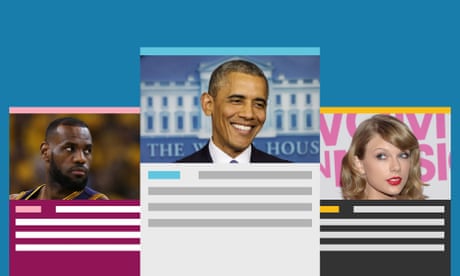 Sign up for Guardian Today US edition: the day's must-reads sent directly to you

Read more
They both seem to have a strange attraction for one another. Trump has gone out of his way to praise Putin’s strong leadership. After publicly asking Putin to hack into his opponent’s emails, Trump graciously downplayed his friend’s role in his own election last year – presumably for fear of embarrassing him. Meanwhile, Putin has said he likes the way Trump speaks his mind, and has suggested that Russian hackers might just have felt a patriotic duty to help Trump become president.
While the bromance may (or may not) be cooling, they both seem to share a disdain for Merkel, which is little awkward since she is hosting them in Hamburg.
However, there is no single living cultural organism called Trumputin. They are two separate creatures with very different structures, more like a virus and a host: co-dependent but each with delusions about who is the superior form of life.
Putin is a cunning negotiator with the skills of a KGB colonel, varying between brute force, charm and obfuscation. Trump is a blindingly obvious braggart with the skills of someone playing the slot machines in Reno, varying between good fortune and loud noises.
Putin has a strategic interest in reshaping the world according to his needs. Trump has a tactical interest in generating global headlines according to his neediness. One is playing chess; the other is just playing.
Sadly, as with all public romances, this means they will increasingly drift apart. On Syria, Trump has found Putin’s friend Bashar al-Assad to be a child-killing murderer who drops weapons of mass destruction on his own people. On the Paris climate accord, Putin thinks Trump should have stuck with the deal but also sees Trump’s decision as no big deal: “Don’t worry, be happy,” he told NBC.
These differences did not stop a friendly first encounter in Hamburg, where Trump greeted Putin with a handshake and pat on the back. This is not the traditional greeting for someone who has attacked the integrity of your electoral process, but Trump wasn’t elected to respect traditions. He’s a rule-breaker, just like the Russian hackers who helped him get elected for patriotic reasons.
As it happens, hacking was all that was on Trump’s mind in the precious hours as he prepped for Putin. “Everyone here is talking about why John Podesta refused to give the DNC server to the FBI and the CIA,” he tweeted from Europe. “Disgraceful!”
This came as a surprise to anyone in Hamburg, where they prefer instead to talk about the protests or possibly the G20 agenda. It also came as a surprise to Podesta, who was driving across the US on vacation with his wife.
“Dude, get your head in the game,” Podesta tweeted from a pit stop in West Virginia. “You’re representing the US and the G20.”
You see, this is what liberals don’t understand about Trump. The president’s head was precisely in the game. It was just a different kind of game: the game that got him elected with the help of Russian hacking and possible collusion.
The best preparation for Putin was to revisit the scene of their last joint project. Because phone conversations are never enough. Definitely.
Posted by Tony at 12:44 PM