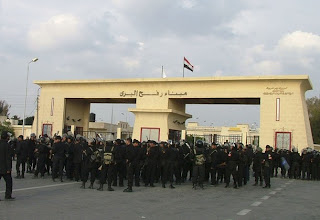 "CAIRO, Feb 21 (IPS) - Egyptian authorities are continuing to prevent humanitarian aid from crossing the border into the Gaza Strip, according to local sources.

"Until now, only about a quarter of all humanitarian aid to arrive in Egypt has made it across the border into Gaza," Hatem Al-Bulk, journalist and political activist, told IPS. "It's all piling up in Al-Arish because the authorities are refusing to let it through the Rafah border crossing." Al-Arish is located some 40 kilometres west of the border in Egypt's Sinai peninsula......

Independent sources at the border challenge Nazif's assertions, saying that far less aid has been allowed through Rafah. The Rafah crossing is the only transit point along Egypt's 14-kilometre border with the Gaza Strip.....

The circuitous route has led to bitter complaints by aid donors.

"A hundred tonnes of food aid from Qatar is stuck in Al-Arish because the Egyptian government insists on sending it to Gaza via Al-Auja," Ahmed Othman, head of a prominent Qatari charity organisation involved in sending donations was quoted as saying by independent daily Al-Dustour on Feb. 3. "Qatar completely rejects this."

According to Hamdi Hassan, MP for the Muslim Brotherhood opposition movement, Egypt's reluctance to open the Rafah crossing on a permanent basis represents "proof of the regime's complicity with Israel against the elected, Hamas-led government in Gaza.

"The continued closure of Rafah is an essential component of Israel's blockade of the Gaza Strip," Hassan told IPS. "By simply opening Rafah on a permanent basis, Egypt could - if it wanted to - bring an end to the siege single-handedly." "
Posted by Tony at 7:40 AM