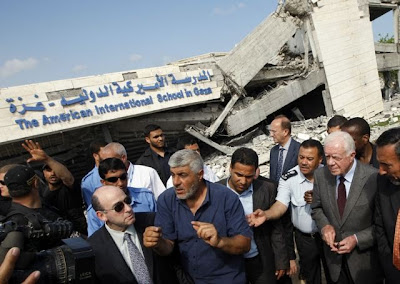 ".....A year later, after the Israeli attack on Gaza, I was able to examine the damage done to the small and heavily populated area, surrounded by an impenetrable wall, with its gates tightly controlled. Knowing of the ability of Israeli forces, often using U.S. weapons, to strike targets with pinpoint accuracy, it was difficult to understand or explain the destruction of hospitals, schools, prisons, United Nations facilities, small factories and repair shops, agricultural processing plants and almost 40,000 homes.

The Goldstone committee examined closely the cause of deaths of the 1,387 Palestinians who perished, and the degree of damage to the various areas. The conclusion was that the civilian areas were targeted and the devastation was deliberate. Again, the criticism of Israel in the Goldstone report is justified......."
Posted by Tony at 1:41 PM