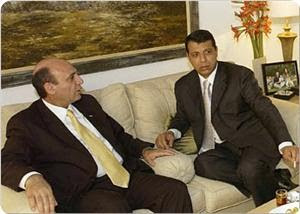 ".....The identities of the only suspects in custody have also been revealed, linking them to anti-Hamas elements in the internationally recognised Palestinian Authority.

Ahmad Hassanein, a Palestinian Authority intelligence agent, and Anwar Shukhaiber, an employee, were found by the Dubai police to have had contact with one or more of the non-Arab suspects on the team, which appears to have had 18 members.

The Palestinians were living in Dubai, where they worked for an estate agency owned by a senior official in Fatah[Dahlan], which is led by Palestinian president Mahmoud Abbas.

They fled to Jordan after the assassination but were extradited to Dubai once it became clear the victim had not died of natural causes. The men were reportedly residents of Gaza until June 2007, when Hamas routed elements of Fatah loyal to the Gaza Strip’s former strongman, Muhammad Dahlan, who has close ties to Israeli, US and Egyptian intelligence agencies.

A third Palestinian, named as “Nahro” Massoud, said be a Hamas security official, has allegedly been detained in Damascus for questioning in connection with the assassination. He is suspected of acting as Mossad’s contact in the Syrian capital, where Mr Mabhouh lived.

Mr Massoud may have been with the victim shortly before he was killed. He is allegedly a commander of Hamas’s military wing, the Ezzedeen al-Qassam Brigades, who left Gaza in 2007.

Khaled Mishaal, head of Hamas’s Damascus-based politburo, has denied involvement of anyone from the movement. Hamas blames Israel for the murder...."
Posted by Tony at 9:24 AM