It is time for Obama to meet Ahmadinejad 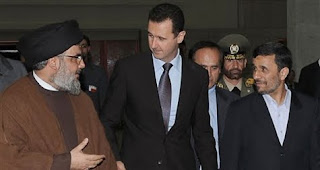 By Marwan Bishara in Imperium
Al-Jazeera

"....Although they said much about the future of the region, including the end of the 'Zionist regime', the anti-Israeli gathering has sent a primarily strategic not polemical message: We stand united - an attack on one of us is an attack on all.

A deterrent message to both Israel and the US, it comes against the backdrop of increased war speculation in Israel and mounting pressures to pass a new round of tougher sanctions against Iran.....

Who will blink first is the whole point of this dangerous diplomatic exercise.

Iran reckons that China and Russia will not sacrifice their relations with Iran and will object to another American escalation in the Middle East. They also realise that new punitive measures will not suffice to curtail Tehran's programme.

For its part, the Obama administration calculates that Chinese/Russian cooperation is indispensable, but that it will take substantial political capital and major quid pro quo for them to come on board.

If Iran continues to defy Washington publicly and successfully, the political price demanded by Russia and China could only increase, all of which puts extra pressure on Washington to act promptly.

But what can the Obama administration offer its fellow UN Security Council members that is worthy of isolating Iran, aside from threatening the alternative - war?

And there is no doubt that war will be either horribly destructive or terribly protracted. Either way, Washington has the most to lose, not Moscow or Beijing....."
Posted by Tony at 4:08 AM