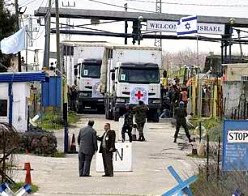 (Trucks carrying Israeli Golan apples into Syria.)
The Quneitra crossing into Syria opened yesterday to let through the first apple shipment of the year, in what has become an annual tradition since it began as a special arrangement six years ago.

The sale of Golan apples in Syria began in 2004, at the initiative of the Israeli Agriculture Ministry. The move came in response to a request by Druze farmers in the Golan Heights, because there were too many apples in the Israeli market.

The ritual has taken place every year since then, with the exception of 2008 when the apple harvest was meager, and it helps the Druze farmers find buyers for their produce. The operation involves Red Cross trucks driven by drivers from Kenya, who bring the produce to Jordan and Syria.

Everyone benefits. The farmers find a market. The Syrians show their loyalty to Druze living in an area that was under Syrian control until the Six-Day War. And Israeli farmers get higher prices for apples on the local market.
Posted by thankgodimatheist at 4:53 AM