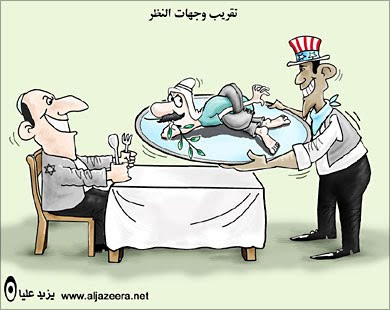 "18/03/2010 US President Barack Obama said on Wednesday that Israeli plans to build more settler homes in occupied Jerusalem were not helpful for the Middle East peace process, but he said the issue had not led to a crisis with one of the United States' closest allies.

"Israel's one of our closest allies, and we and the Israeli people have a special bond that's not going to go away," Obama told Fox News Channel. "But friends are going to disagree sometimes," he added.

Amid suspicious Arab indifference and Palestinian anger, Israel announced during a visit by US Vice President Joe Biden that it planned to build 1,600 more settler homesin Al-Quds, creating a spat with the Obama administration.

The Obama administration had previously described Israel’s decision as an “insult”.....

Obama described the Palestinian reaction to Israel’s opening of a synagogue near the holy Aqsa mosque as ‘riots’ and condemned them.
"Yesterday when there were riots by the Palestinians against a synagogue that had reopened, we condemned them in the same way because what we need right now is both sides to recognize that is in their interests to move this peace process forward," he concluded....."
Posted by Tony at 3:58 AM