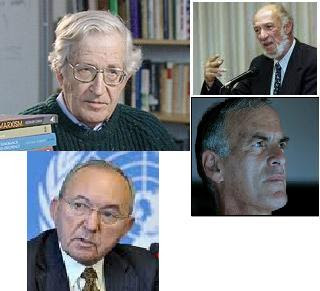 "RAMALLAH, May 18, 2010 (IPS) - When internationally renowned linguist, philosopher and political analyst Noam Chomsky was barred from entering the West Bank, he joined a chorus of Jewish intellectuals savaged by the Israeli government for outspoken criticism.....

"I find it hard to think of a similar case, in which entry to a person is denied because he is not lecturing in Tel Aviv. Perhaps only in Stalinist regimes," Chomsky told the Israeli daily ‘Haaretz’.

Several years ago Norman Finkelstein, a respected American academic and political analyst, was interrogated for a number of hours at Ben Gurion International airport before he was refused entry by Israel’s domestic intelligence agency, the Shin Bet. Finkelstein believes he was targeted due to his harsh criticism of Israel for its war on Gaza.

Richard Falk, professor emeritus of international law at Princeton University and the United Nations Special Rapporteur on Human Rights in the Palestinian Territories, was expelled when he tried to enter Israel in 2008.

"I was leading a mission that had intended to visit the West Bank and Gaza to prepare a report on Israel's compliance with human rights standards and international humanitarian law," said Falk.

But it appears the Israeli government and the Israel lobby have reserved their most vituperative attacks for South African Justice Richard Goldstone who was appointed by the U.N. to investigate war crimes during Israel’s devastating assault on Gaza from December 2008 to January 2009.

The Israelis refused to cooperate with his investigation and prevented him from entering Gaza from Israel. He had to enter via Egypt.....

Israeli forces were following the Dahiya Doctrine established after Israel’s 2006 war with Lebanon when a Hezbollah stronghold in the West Beirut suburb of Dahiya was almost completely razed by the Israeli Defence Forces (IDF).

"What happened in the Dahiya quarter of Beirut in 2006 will happen in every village from which Israel is fired on," said Gadi Eisenkot, head of the IDF’s northern division. "This is not a recommendation. This is a plan. And it has been approved," he added.

Israeli leader Col. (Retd) Gabriel Siboni, stated the following, weeks before the Israeli military’s attack on Gaza: "With an outbreak of hostilities, the IDF will use force that is disproportionate to the enemy’s actions and the threat it poses. Such a response aims at inflicting damage and meting out punishment to an extent that will demand long and expensive reconstruction processes.""
Posted by Tony at 3:59 AM