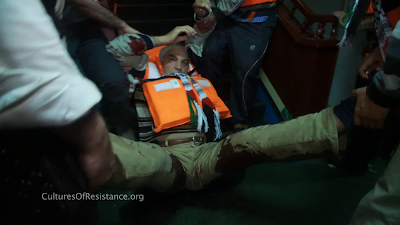 By Ali Abunimah
"The one hour long raw footage released by the Cultures of Resistance Foundation (CoR) of the 31 May Israeli attack aboard the Mavi Marmara shows clear evidence of indiscriminate Israeli fire aboard the ship. Nine people were killed and dozens injured when Israeli forces boarded and seized what was the largest passenger vessel in the six-ship Gaza Freedom Flotilla in the international waters of the Mediterranean Sea about 80 miles west of the coast of Israel.
Starting at about 43 min 29 sec into the footage we begin to see injured people being carried by other passengers. This continues throughout the rest of the footage -- some of the people have gunshot wounds in the neck, shoulders, stomach, legs, or are so covered in blood it is difficult to tell where they have been hit. At 46 min 58 sec, for example, we see a white-haired man with blood pouring from his legs being carried down a main staircase into a lower deck of the ship to an area where other injured people are being treated....."
Posted by Tony at 9:21 PM