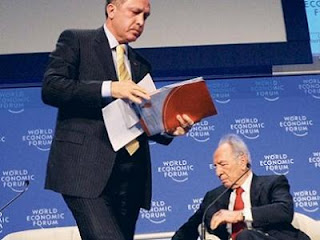 "'Even despots, gangsters and pirates have specific sensitiveness, (and) follow some specific morals.'

The claim was made by Turkish Prime Minister Recep Tayyip Erdogan in a recent speech, following the deadly commando raid on the humanitarian aid flotilla to Gaza on May 31. According to Erdogan, Israel doesn’t adhere to the code of conduct embraced even by the vilest of criminals.

The statement alone indicates the momentous political shift that’s currently underway in the Middle East. While the shift isn’t entirely new, one dares to claim it might now be a lasting one. To borrow from Erdogan’s own assessment of the political fallout that followed Israel’s raid, the damage is “irreparable.”......."
Posted by Tony at 6:23 AM