Deraa: A city under a dark siege 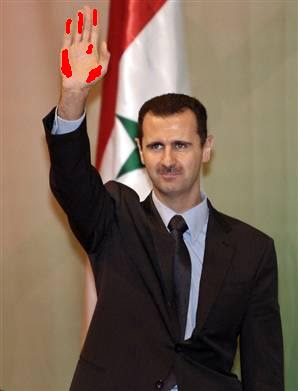 Residents of town besieged by the army paint picture of chaos fuelled by secret police.

"As darkness fell across it, Deraa was a city under siege.

Tanks and troops control all roads in and out. Inside the city, shops are shuttered and nobody dare walk the once bustling market streets, today transformed into the kill zone of rooftop snipers.

Trapped and terrified inside their homes, families are running low on food and drinking water, with many water tanks shot and emptied. Electricity has been cut, as have all mobile and fixed phone lines. The internet, so vital in broadcasting images of the regime's armed crackdown on peaceful protestors, is down.

Unable to crush the people who first dared rise up against him - neither with the secret police, paid thugs or the special forces of his brother's military division - President Bashar al-Assad has sent thousands of Syrian soldiers and their heavy weaponry into Deraa for an operation the regime wants nobody in the world to see.....

Leading the assault on Deraa are the elite forces of the Fourth Division of the army, commanded by President Assad's brother Maher al-Assad, who has deployed his troops in the city since the early days of the uprising, according to multiple eyewitness accounts.

"They dress in black and are large and muscular," said one resident, speaking of Maher al-Assad’s men. "They have a red stripe on one shoulder. I've seen them at night and members of my family have described them to me."......."
Posted by Tony at 6:49 AM