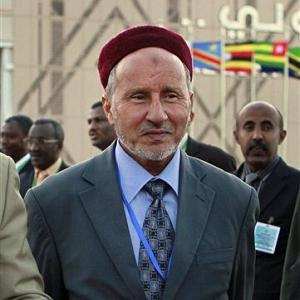 The New Karzai is Already Here.....

The West and Libya

"The US-Nato intervention in Libya, with United Nations security council cover, is part of an orchestrated response to show support for the movement against one dictator in particular and by so doing to bring the Arab rebellions to an end by asserting western control, confiscating their impetus and spontaneity and trying to restore the status quo ante.

...... We're expected to believe that the leaders with bloody hands in Iraq, Afghanistan and Pakistan are defending the people in Libya.......
The Saudis entered Bahrain where the population is being tyrannised and large-scale arrests are taking place. Not much of this is being reported on al-Jazeera. I wonder why? The station seems to have been curbed somewhat and brought into line with the politics of its funders......

They can rely on the French as well. Sarkozy was desperate to do something. Unable to save his friend Ben Ali in Tunisia, he's decided to help get rid of Gaddafi. The British always oblige and in this case, having shored up the Libyan regime for the last two decades, they're making sure they're on the right side so as not to miss out on the division of the spoils. What might they get?

....... The US state department is busy preparing a new government composed of English-speaking Libyan collaborators. We will now never know how long Gaddafi's crumbling and weakened army would have held together in the face of strong opposition. The reason he lost support within his armed forces was precisely because he ordered them to shoot their own people. Now he speaks of imperialism's desire to topple him and take the oil and even many who despise him can see that it's true. A new Karzai is on the way.

The frontiers of the squalid protectorate that the west is going to create are being decided in Washington. Even those Libyans who, out of desperation, are backing Nato's bomber jets, might – like their Iraqi equivalents – regret their choice.

All this might trigger a third phase at some stage: a growing nationalist anger that spills over into Saudi Arabia and here, have no doubt, Washington will do everything necessary to keep the Saudi royal family in power. Lose Saudi Arabia and they will lose the Gulf states. The assault on Libya, greatly helped by Gaddafi's imbecility on every front, was designed to wrest the initiative back from the streets....."
Posted by Tony at 7:58 AM