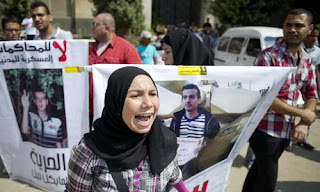 Maikel Nabil Sanad among almost 2,000 prisoners convicted by military tribunal over the past year now set to be released

"...."We will never forget: the army and people were never one hand," Sanad's brother Mark Nabil said on Twitter as news of the pardon came through. "Freeing Maikel is not enough though. The army must, before the revolution's anniversary [on 25 January], free all those who were convicted by military courts."

Aalam Wassef, a journalist and campaigner who has followed Sanad's case closely, said events in Egypt over the past year vindicated the anti-junta post that landed the blogger in jail. "Maikel's predictions were logical rather than prophetic," he told the Guardian. "He had maintained a critical stance towards the Egyptian military even before the revolution, so once the generals took power it was very obvious to him the way things would develop."

Wassef accused Scaf of offering empty gestures in place of genuine reform. "It's a political concession, though a very provocative one," he said. "How dare they call it a pardon for Maikel when it is they, the generals, who should be requesting a pardon from the people?"

The first anniversary of Egypt's revolution is expected to spark some of the largest demonstrations yet seen against the ruling generals...."
Posted by Tony at 4:57 AM