Egypt: The revolution that shame built 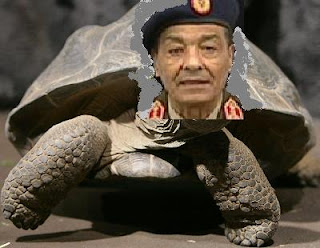 Although Bouazizi's self-immolation mobilised a nation, Egyptians would need to exercise a different tactic for change.

".....But whatever the fate of his memory, the revolution he launched produced the only clear success story of the Arab Spring. For her part, Asmaa Mahfouz and the April 6 movement has struggled to maintain a leading role in a post-Mubarak political landscape that has seen Egypt's deep state and its well-funded and deeply rooted Islamist movements carve up the emerging political space between them. Mahfouz herself stood up to attempts by SCAF to prosecute her for supposedly inciting violence against the military, but her popularity has been diminished as a result. Her fellow April 6 activists continue to be harassed and charged with such crimes as "attempting to overthrow the regime" and "trying to destabilise the country".

They will no doubt find themselves between SCAF's crosshairs again if the "Liars" (Kazeboon) campaign launched against the military begins to show results. At the same time, as most Egyptians have laid aside whatever revolutionary mantle they'd taken up and attempted to normalise their lives, the defenders of Tahrir have increasingly come from the poorest and most marginalised sectors of society - from fanatic football "hooligans" to street kids - who, while representing the majority of Egyptians demographically, are the view in the mirror most Egyptians want to see when confronted by the ongoing violence and repression of the system they'd sought to tear down - beginning a year ago today.

Many commentators have described the ongoing repression and violence deployed by SCAF in the past year as bumbling or incompetent. However, given the extremely weak hand dealt to the military by the revolution, the fact that it has managed to retain a firm grip on power, negotiate an entirely new and seemingly productive relationship with the rising religious political forces, and simultaneously repress the core revolutionary forces - while convincing millions of Egyptians to buy into the new political environment through elections - can only be described as an accomplishment.

But the sparks of inspiration generated by the words, music and images of activists and artists such as Mahfouz, Wael Ghonim or Ramy Essam have yet to go dark. They remain at the heart of the revolutionary impulse that still animates Egyptian politics, whatever the setbacks of the past few months, and no matter who leads parliament when it is seated on January 25.

If the emerging political system begins to look and feel too much like the one so many Egyptians thought they'd helped to topple a year ago, the calls to Tahrir will again go out and the "couch party" - the majority of Egyptians who either sat out the first phase of the revolution or were too quick to leave the square once Mubarak was gone - will again be shamed onto the streets. If not by Asmaa Mahfouz, then by someone who today is as unknown as she was 53 weeks ago. And that is reason enough to celebrate January 25, without reservation and with hope for the future. "
Posted by Tony at 9:33 AM