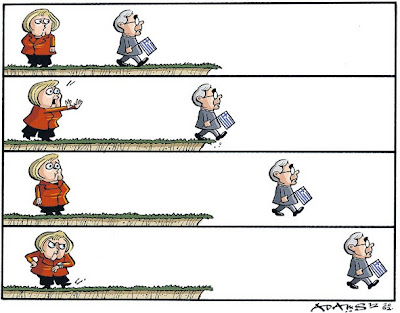 "The last time Greece faced a crisis of this magnitude was in 490 BC when the armies and fleets of the Persian Empire were converging on Athens.

The great Athenian leader Themistocles rallied his countrymen and defeated the Persians.

Alas, this time Greece has no Themistocles to save the embattled nation. Unlike the incompetent Persian Emperor Darius, the Greeks now face Germany’s very tough, stern and able Frau Doktor Angela Merkel who has vowed to impose “zucht und ordnung” (order and discipline) on the unruly Greeks.

A potentially fatal run on Greeks banks is underway, with over 800 million euros withdrawn last week. The sky is indeed falling.