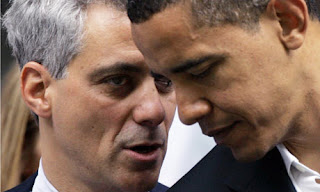 The politics of prosecuting the "NATO Three"

"Rahm Emanuel runs Chicago like he ran the Obama White House: with an iron fist and a foul mouth – and the NATO summit, being held in the Windy City, is the perfect occasion for him to demonstrate just how “tough” he can be.

“Never let a serious crisis go to waste. What I mean by that is it’s an opportunity to do things you couldn’t do before.” Thus spake Rahm, during his days as Obama chief consigliere — and with the arrest of at least three individuals on the eve of the anti-NATO protests on charges of “material support for terrorism,” possession of incendiary devices, and conspiracy, we are seeing Rahm’s credo in practice. The “NATO Three,” as they’re known on Twitter, are accused of plotting to attack Chicago police stations, the mayor’s home, and Obama’s Chicago election headquarters.

Of course, any visible opposition to the militarism draining this country is a crisis for the War Party, whose shaky rule can’t tolerate visible protest of any sort. Using all the legal and bureaucratic resources given them by the “Patriot” Act and the Homeland Security State, Rahm and his friends in the White House are taking the opportunity to boast of how this is the first time state “anti-terrorist” laws have been used in a prosecution. This is how a phony “crisis” begets the opportunity for the State to smear its enemies and make more inroads on what is left of our civil liberties......

There have been nineteen arrests in the run up to the Chicago anti-NATO events, in what is clearly an attempt to intimidate and isolate the protesters, but these arrests also serve a broader purpose. You’ll note one of the charges is that the “conspirators” were planning on attacking the Obama campaign’s reelection headquarters, a detail that gives the case a distinctly political cast. After all, those evil commie-faggot bomb-throwing “anarchists” were plotting to blow up Obama’s reelection effort! Although the GOP is trying to accomplish this in a purely metaphorical sense, aren’t those anti-government Republicans kind of like anarchists? It’s Obama or Anarchy — how about that for framing the presidential campaign!
It’s just the kind of dirty trick we might expect from a man who once delivered a dead fish to someone who had crossed him. This time, however, the stench of Rahm’s dirty tricks – it was his police department that sent in the infiltrators – may be his undoing. The use of infiltrators against a rival political movement is the hallmark of a police state, and as the details of the case come out in court it will become swiftly apparent that the alleged “imminent threat” was created by the very people who are supposed to be protecting us. ....."
Posted by Tony at 4:18 AM