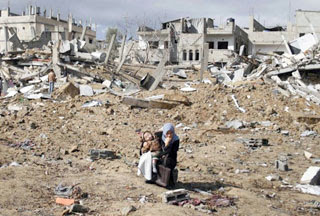 ".....Despite all evidence that the Israeli siege on Gaza is part of a well-orchestrated political and military campaign, many insist on seeing it as an issue concerning household supplies, gasoline and foodstuff. Indeed, with 31 per cent unemployment, and more than 75 per cent of the population reliant on international aid, Gaza is suffering a humanitarian crisis. But that crisis can never be truly appreciated without a thorough understanding of the political underpinnings of Israel’s ultimate objectives in Gaza and the rest of Palestine. The Gaza siege is an Israeli political decision that must be addressed and resisted as such. It should never be allowed to exist as yet another status quo, generating a few words of censure but no meaningful action."
Posted by Tony at 7:06 AM