What about women’s rights in Egypt? 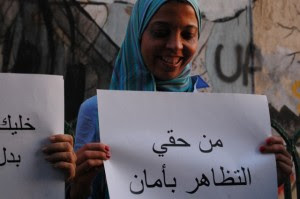 "CAIRO: Egypt is in full protest mode once again. Tens of thousands are packing Cairo’s Tahrir Square to once more demand an end to the military control over the country. As anger and uncertainty reign in the country, women remain on the outside looking in, fearful of heading down to the square to show their support. The reason is simple: they are attacked, assaulted, groped and harassed throughout the square.....

This is the current, modern Egypt that exists. And one where women are silenced from public. The use of violence and harassment against all women in this country is the main social problem that is barring any real and viable change from occurring.

If Egypt is to see the success of the revolution then women, and violence against them, must be battled at every step.

A constitution and election are important. But a country where women live in fear of walking down their streets, anywhere, is not a country that has a bright future."
Posted by Tony at 7:11 AM