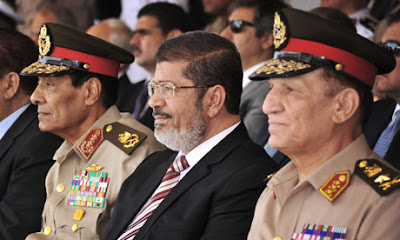 The appointment of Hisham Kandil, from the outgoing cabinet, is a bitter reminder that the revolution is far from complete

".....Worse still, he did not seem to have the guts to make a clean break with the old establishment. Perhaps he couldn't. He has picked a minister from the outgoing cabinet for the post. This being the same cabinet he and his Islamist Justice and Freedom party campaigned against for months, but failed to force from office through a vote of no confidence.

If this is the best he could come up with after weeks of consultations, there's little reason to get excited about who the new prime minister might select for his cabinet in what was supposed to be Egypt's first "revolutionary government"......

His choice of prime minister is once again a bitter reminder for those who supported the revolution that it is still far from complete, and will remain incomplete as long as the old nomenklatura in the army, the police and the top mandarins keep their chairs. Morsi cannot be the revolution's president and continue to rely on the old guard. Cohabitation Egyptian style will prove to be a recipe for, at best, crab walk; at worst, paralysis.

But there are those who believe that Morsi, far from being coerced into making certain choices, is pursuing a deliberate plan. He seems to think that they can rule Egypt without dismantling the old machinery – instead he wants to take command of it. If that is indeed what he is trying to do, he will have proven critics of the Muslim Brothers right: they have more in common with Mubarak's old ruling party, the now-dissolved NDP, than they are willing to admit."
Posted by Tony at 3:55 AM