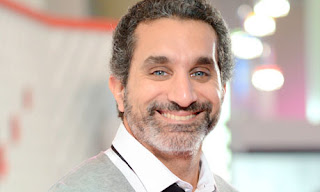 "Egypt's top prosecutor has ordered the arrest of the Middle East's most popular TV satirist for allegedly insulting both Islam and the Egyptian president.

The case has heightened concerns about the future of free speech in Egypt, as it comes only a day after nine opposition activists and four lawyers were arrested in Alexandria – and less than a week after five prominent activists were cited for encouraging protests against theMuslim Brotherhood, whose affiliates lead Egypt's government.
Bassem Youssef, who is known as Egypt's Jon Stewart, rose to prominence following the country's 2011 uprising. His show attracts over 30 million viewers across the Middle East, has previously been sued several times by private individuals. But this is the first time that the prosecutor general, Talaat Abdallah, has followed up one of their complaints with legal action – a deeply symbolic gesture that suggests the Islamist-led regime of Mohamed Morsi is now prepared to take a more authoritarian stance against its critics.
Youssef's show, al-Bernameg, critiques both fundamentalist clerics and Morsi – whose face Youssef once controversially projected on to a pillow – and is seen as a triumph for free speech in the post-Mubarak era.
But that rosy view has been rocked by the prosecutor's intervention, the significance of which was forewarned earlier this month in an interview with the Guardian, when Youssef ominously said: "You can't prevent people from suing us. The tipping point would be if these law suits are activated by the attorney general."
This weekend that tipping point arrived, and it was received furiously by the government's opponents.
"Pathetic efforts to smother dissent and intimidate media is a sign of a shaky regime and a bunker mentality," tweeted Mohamed ElBaradei, the leader of Egypt's main opposition coalition.
Youssef's arrest is doubly concerning for Egypt's disparate opposition because it comes so soon after Abdallah also accused five anti-Brotherhood activists of using social media to incite violence against the Muslim Brotherhood. But in their most recent tweets, some of the activists were actively critical of violence. This has prompted fears that their arrest was a politically motivated ruse to crack down on prominent critics of the government.
Abdallah's actions also renewed concerns about Egypt's "Brotherhoodisation", a term used by critics of the regime to imply that the Muslim Brotherhood has used its influence to appoint its allies to administrative positions whose roles are meant to be politically neutral. Abdallah himself has long been considered such a politicised appointment, after Morsi controversially circumvented constitutional protocol to promote him in November. Abdallah's decision to arrest the activists and Youssef adds to this impression, particularly as it immediately followed a promise by Morsi to punish those who had incited violence against the Brotherhood. To add to the mess, a judge this weekruled that Abdallah's appointment was illegal – but Abdallah himself refused to stand down."
Posted by Tony at 4:40 AM