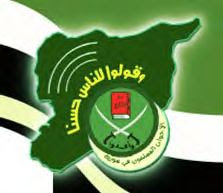 Rebel officers said the Brotherhood was putting narrow factional politicking over the broad interests of the revolt.
"We hold you responsible for delaying victory of the revolution and the fragmentation of the opposition," the Joint Command of the Free Syrian Army said in an open letter to the Muslim Brotherhood.
There was a "deep confrontation" within the opposition between the Muslim Brotherhood and other secular, national and military factions, the FSA said.

Anti-Brotherhood sentiments, particularly in Damascus, were running high, the FSA warned, with growing anger at efforts by the group to control military and humanitarian relief efforts administered by the Syrian National Coalition, the opposition bloc given Syria's seat in the Arab League at a summit last week.
A significant majority of its members are directly or indirectly allied to the Muslim Brotherhood, much to the dismay of other rebel factions who say the group's representation in the SNC political chambers vastly outweighs its street presence inside Syria......"