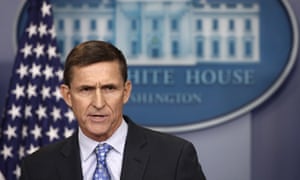 The US national security advisor, Michael Flynn, resigned late on Monday night amid a flow of intelligence leaks that he had secretly discussed sanctions with the Russian ambassador to Washington and then tried to cover up the conversations.
The resignation, with the Trump era less than four weeks old, is the latest and most dramatic convulsion in the most chaotic start to an administration in modern US history.
It was far from clear whether Flynn’s departure would steady an inexperienced and feuding White House, or resolve the lingering suspicions about the Trump team’s pre-election contacts with the Kremlin.

Read more
The White House issued a statement just after 11pm in Washington announcing the resignation, shortly after reports broke that the Trump administration had been warned weeks ago that Flynn might be vulnerable to Russian blackmail.
The statement also named retired army general Joseph Kellogg, who goes by his middle name Keith, as acting national security advisor, pending the appointment of a permanent successor. It was reported that a third general, former CIA director, David Petraeus, was due to meet Trump on Tuesday.
But Petraeus has legal issues of his own. He is currently nearing the end of two years probation for sharing classified information with his biographer and lover, Paula Broadwell.
In his resignation letter, Flynn claimed he had mistakenly misled vice-president Mike Pence and other Trump officials about the nature of phone calls in December to the Russian ambassador, Sergei Kisilyak. When intelligence leaks about the communications began appearing last month, Pence and other White House officials insisted that the contact had only involved an exchange of Christmas greetings and arrangements for a future phone conversation between Trump and Vladimir Putin.
However, subsequent leaks suggested that they had been more substantial, and concerned sanctions the Obama administration was about to impose on Moscow for interference in the presidential elections. Intelligence officials claimed that Flynn had given the impression the sanctions might be lifted once the Trump administration came to office on 20 January.
“In the course of my duties as the incoming national security advisor, I held numerous phone calls with foreign counterparts, ministers, and ambassadors,” Flynn said in his resignation letter. “These calls were to facilitate a smooth transition and begin to build the necessary relationships between the president, his advisors and foreign leaders. Such calls are standard practice in any transition of this magnitude.”
“Unfortunately, because of the fast pace of events, I inadvertently briefed the vice president elect and others with incomplete information regarding my phone calls with the Russian ambassador. I have sincerely apologized to the president and the vice president, and they have accepted my apology.”
Russian politicians offered a fierce defence of Flynn. Konstantin Kosachev, chairman of the foreign affairs committee at the upper chamber of the parliament, said in a Facebook post that firing a national security adviser for his contacts with Russia is “not just paranoia but something even worse”.
Kosachev’s counterpart at the lower chamber of the Russian parliament, Alexei Pushkov, tweeted shortly after the announcement that “it was not Flynn who was targeted but relations with Russia”.

On Monday afternoon, the White House appeared to struggle with how to handle the accusations. A White House statement that the president was “evaluating the situation” conflicted with White House counselor Kellyanne Conway telling reporters that Trump had “full confidence” in Flynn.

Mike Flynn might be done – but Trump's nightmare has just begun

Read more
Flynn’s – and the Trump administration’s – problems run far deeper than the December phone calls with Kisilyak. The former Defense Intelligence Agency (DIA) chief is also reportedly being investigated by the army for accepting money in late 2015 for a speaking engagement in Moscow, which could have breached military rules. Furthermore, the repeated and detailed leaks by a disgruntled and alarmed US intelligence community suggested that Flynn’s contacts with Kisilyak dated back to before the election, raising more questions about whether the Trump campaign had any knowledge of the Russian effort to skew the elections.
A handful of intelligence agencies are looking into those suspicions, as are four separate congressional committees. Adam Schiff, the ranking Democrat on one of those panels, the House intelligence committee, demanded to know when contacts with Russian officials started and how far up the Trump chain of command did responsibility for those contact rest.
Schiff said: “The Trump administration has yet to be forthcoming about who was aware of Flynn’s conversations with the ambassador and whether he was acting on the instructions of the president or any other officials, or with their knowledge.”
At the time of his departure, Flynn appeared to have been losing a power struggle inside the White House in which the established institution and processes of the national security council (NSC) were being sidestepped by a small group of Trump advisors, led by Steve Bannon, Trump’s chief strategist and former head of Breitbart News, which has been a platform for the far right.
Alongside him are Stephen Miller, another rightwing ideologue, and Jared Kushner, the president’s son-in-law and advisor. They have set up the Strategic Initiatives Group, a parallel institution to the national security council inside the White House, which produces policies, in the form of quick-fire executive orders and memoranda, without consultation with the staff experts on the National Security Council (NSC).
Ignored at best, berated at worst, the NSC career staff began leaking copiously about Trump’s erratic phone calls with other world leaders and other missteps, infuriating the president, who ordered leak investigations, further deepening the discontent and dysfunction inside the White House. Any successor to Flynn would face the same struggle for influence and the president’s ear as he did.
Posted by Tony at 7:04 AM