Former FBI director offers statement describing a meeting in which Trump asked him to drop his inquiry into Michael Flynn: ‘I hope you can let this go’


The fired FBI chief, James Comey, has publicly revealed how Donald Trump put pressure on him to shut down an investigation into a senior adviser’s links to Russia.
Trump asked Comey to drop his investigation into the former national security adviser Gen Michael Flynn, Comey’s first written account of his interactions says. 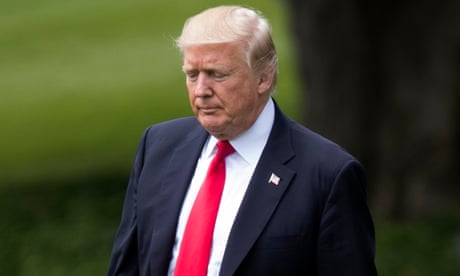 The White House's greatest threat ahead of Comey testimony? Trump, of course

Read more
“I hope you can see your way clear to letting this go, to letting Flynn go,” the president is alleged to have told Comey in the White House in February. “He is a good guy. I hope you can let this go.”
Comey, subsequently dismissed by Trump, writes that he understood the president to be asking him to drop the investigation into Flynn, an intervention he found “very concerning”.
Comey’s statement for the record was released on Wednesday ahead of his eagerly awaited appearance before the Senate intelligence committee on Capitol Hill on Thursday. Over seven pages, he provides intriguing detail about his private conversations with Trump, including a 30 March phone call in which Trump asked what Comey could do to “lift the cloud” of the Russia investigation.
The document appears certain to become the focus of an investigation into whether Trump is guilty of obstruction of justice, an offence for which he could be impeached.
It tells how, over dinner on 27 January, Trump told him repeatedly, “I need loyalty,” and, in a phone call on 30 March, he asked what Comey could do to “lift the cloud” of the Russia investigation.
In between, on 14 February, Comey recalls a meeting at the Oval Office with a group of senior officials who then left the room. He writes: “When the door by the grandfather clock closed, and we were alone, the President began by saying, ‘I want to talk about Mike Flynn.’ Flynn had resigned the previous day. The President began by saying Flynn hadn’t done anything wrong in speaking with the Russians, but he had to let him go because he had misled the Vice President. He added that he had other concerns about Flynn, which he did not then specify.
“The President then made a long series of comments about the problem with leaks of classified information – a concern I shared and still share.”
After a brief interruption, Trump resumed. “The President then returned to the topic of Mike Flynn, saying, ‘He is a good guy and has been through a lot.’ He repeated that Flynn hadn’t done anything wrong on his calls with the Russians, but had misled the Vice President.

Testimony could establish whether Trump’s conversations with the ex-FBI chief were simply high-level confidential chatter – or something crossing into illegality
Read more
“He then said, ‘I hope you can see your way clear to letting this go, to letting Flynn go. He is a good guy. I hope you can let this go.’ I replied only that ‘he is a good guy’. (In fact, I had a positive experience dealing with Mike Flynn when he was a colleague as Director of the Defense Intelligence Agency at the beginning of my term at FBI.) I did not say I would ‘let this go’.”
Comey adds that he immediately prepared an unclassified memo of the conversation about Flynn and discussed the matter with FBI senior leadership. “I had understood the President to be requesting that we drop any investigation of Flynn in connection with false statements about his conversations with the Russian ambassador in December. I did not understand the President to be talking about the broader investigation into Russia or possible links to his campaign.
“I could be wrong, but I took him to be focusing on what had just happened with Flynn’s departure and the controversy around his account of his phone calls. Regardless, it was very concerning, given the FBI’s role as an independent investigative agency.”
In another critical and vividly described scene, Trump invited Comey to dinner at the White House on 27 January and repeatedly asked the FBI director to pledge his personal loyalty.
“It turned out to be just the two of us, seated at a small oval table in the center of the Green Room. Two Navy stewards waited on us, only entering the room to serve food and drinks,” Comey writes.
Trump started off the conversation by asking Comey whether he wanted to stay in his job, which the FBI director said he “found strange” as the president had already told him in earlier conversations he wanted Comey to stay.
In his statement, Comey makes it clear that Trump was seeking to put pressure on him. “My instincts told me that the one-on-one setting, and the pretense that this was our first discussion about my position, meant the dinner was, at least in part, an effort to have me ask for my job and create some sort of patronage relationship,” Comey said. “That concerned me greatly, given the FBI’s traditionally independent status in the executive branch.”

The investigations swirling around Donald Trump – a short guide

Read more
Comey said he had every intention of staying on to finish his 10-year term in office, and made an effort to fend off Trump’s attempt to gain leverage on him.
“And then, because the set-up made me uneasy, I added that I was not ‘reliable’ in the way politicians use that word, but he could always count on me to tell him the truth. I added that I was not on anybody’s side politically and could not be counted on in the traditional political sense, a stance I said was in his best interest as the President.
“A few moments later, the President said, ‘I need loyalty, I expect loyalty.’ I didn’t move, speak, or change my facial expression in any way during the awkward silence that followed. We simply looked at each other in silence.”
Later in the conversation, Trump tried again, telling Comey: “I need loyalty.”
Comey replied: “You will always get honesty from me.”
Trump then said: “That’s what I want, honest loyalty.”
Comey writes: “I paused, and then said, ‘You will get that from me.’ As I wrote in the memo I created immediately after the dinner, it is possible we understood the phrase ‘honest loyalty’ differently, but I decided it wouldn’t be productive to push it further. The term – honest loyalty – had helped end a very awkward conversation and my explanations had made clear what he should expect.”
The statement also describes how Trump called Comey at the FBI on 30 March and described the Russia investigation as “a cloud” that was impairing his ability to govern. In a reference to a salacious dossier compiled by a former British intelligence officer, Comey writes: “He said he had nothing to do with Russia, had not been involved with hookers in Russia, and had always assumed he was being recorded when in Russia. He asked what we could do to ‘lift the cloud’.
“I responded that we were investigating the matter as quickly as we could, and that there would be great benefit, if we didn’t find anything, to our having done the work well. He agreed, but then re-emphasized the problems this was causing him.”
The last time Comey spoke to Trump was an 11 April phone call, where Trump repeated his request that Comey make public that the president was not under investigation, again complaining that “the cloud” hanging over his presidency was stopping him from doing his job.
Comey says he told Trump that the request should go through the justice department. Trump then said: “Because I have been very loyal to you, very loyal; we had that thing you know.” Comey says he did not reply or ask what the president meant by “that thing”.
Less than a month later, on 9 May, Trump fired Comey. The FBI director first discovered he had been dismissed when the news was projected on a screen where he was giving a speech on an FBI field office in Los Angeles.
On Wednesday, Richard Burr, the chairman of the Senate intelligence committee, told reporters on Capitol Hill the testimony had been released in advance per an agreement with Comey.
Senators were in the midst of casting votes as news of Comey’s prepared remarks surfaced. Senator John McCain of Arizona said his initial understanding of the revelations was that they were “disturbing”, although he stopped short of deeming it an obstruction of justice just yet.“Just as I suspected ... I think there’s going to be many shoes to drop before this one is over,” McCain said.
Adam Schiff, the top Democrat on the House intelligence committee, said Comey’s testimony confirms “a host of troubling allegations” around Trump’s conduct.
“Two stand out,” he explained in a statement. “The president sought to obtain a pledge of loyalty from the director of the FBI during a conversation that centered on whether the director would be able to keep his job. And second, the president effectively asked the director to drop the investigation of his former national security adviser. Congress must now determine whether the director’s refusal to do either – or any other motivation to interfere with or obstruct any part of the Russia investigation – led ultimately to Comey’s firing.”
Posted by Tony at 12:55 PM