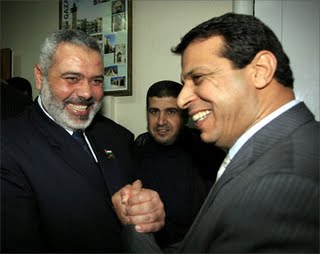 Exiled Palestinian politician Mohammed Dahlan for the first time discussed details of a power-sharing deal he is attempting to implement with former rival Hamas for ruling Gaza.
Dahlan, 55, a former Gaza security chief, said in a Saturday phone interview with the AP news agency published in part by Al Jazeera on Sunday that he expects the quietly negotiated agreement to lead to opening of the blockaded Palestinian territory's border with Egypt in late August and an easing of crippling power outages.
Funding has been secured from the UAE for a $100m power plant to be built on the Egyptian side of the border, said Dahlan from the United Arab Emirates.
Regional analysts are closely watching what closer ties with Egypt may mean for Hamas's relations with Qatar, which in recent years has spent more than $500m improving infrastructure and building clinics in Gaza.
Egypt and Saudi Arabia are now leading a Sunni-Arab drive against Qatar over its ties with Iran, accusing it of fomenting terrorism, a charge Doha denies. The analysts say if Egypt is forging better relations with Hamas, it may well insist on Hamas giving up its friendship with Doha.
While many of Dahlan's supporters are expected to return from exile as part of the deal, he said he plans to remain in exile.
"It's better for Gaza that I stay in the diaspora and approach everyone who can extend a helping hand to Gaza," Dahlan told the AP.

RAMALLAH, West Bank (AP) — An exiled Palestinian politician has detailed his Gaza power-sharing deal with former foe Hamas for the first time. He says the understandings reached i
apnews.com

Twitter Ads info and privacy
He added that his relationship with Gaza's newly elected Hamas chief, Yahya Sinwar, was helping to forge a once unthinkable alliance backed by Egypt and the UAE.
The two grew up in the streets of southern Gaza's Khan Younis refugee camp before joining rival camps, Sinwar with Hamas and Dahlan the mainstream Fatah movement.
"We both realised it's time to find a way out" for Gaza, Dahlan said.
The deal with Sinwar, which may create an opening for the exiled Dahlan to return to Palestinian politics, is in the early stages of implementation and could falter.
Sinwar reportedly struck the deal with Dahlan without consulting or informing other Hamas leaders.

An informed source told MEE: “This is very dangerous and unprecedented for the movement. This is a clear attempt to split Hamas, which ever since 1992, when the brains of the movement moved outside Gaza, made strategic decisions only after extensive collective consultation.
“The UAE want to squeeze Turkey and Qatar out of Gaza. Dahlan and the UAE want to deal a blow to the Qatar-Turkish axis by splitting Hamas.”
If the accord does proceed, it could also serve to further sideline Palestinian President Mahmoud Abbas, 82, who presides over autonomous enclaves in the Israeli-occupied West Bank.
Abbas has a toxic relationship not only with Hamas, which seized Gaza from him in 2007, but also with Dahlan, who is a former top aide.
The objectives of the Dahlan-Hamas deal - ending the border blockade, reviving Gaza's battered economy - could also weaken Palestinian statehood aspirations by creating a "mini-state" in Gaza, Al Jazeera said.

Senior Fatah leaders have lashed out at Egypt over deals reached with Palestinian President Mahmoud Abbas’ archrival Mohammed Dahlan to improve conditions in Gaza, even as Abbas is trying to pressure...
al-monitor.com

Twitter Ads info and privacy
For more than two decades, Palestinian leaders, including Abbas, have unsuccessfully tried to establish a state in the West Bank, Gaza and east Jerusalem through negotiations with Israel.
Still, Dahlan said that his deal with Hamas would not turn Gaza into a separate entity.
"We are patriots, not separatists," he said, adding that he would do everything in his power to prevent a further drifting apart of the Palestinian territories.
The multi-millionaire with far-flung business interests in the region and close ties to leaders of Egypt and the UAE also said that he has no desire to replace Abbas.
"I have no ambitions to be president," he said. "Maybe that was the case when I was younger, but now I see the situation. Seventy percent of the land is in the hands of the Israelis, and they have no intentions to give us a state."
Azzam al-Ahmed, an Abbas aide who has negotiated with Hamas in the past, told Al Jazeera on Sunday that the Dahlan-Hamas understandings "are going nowhere".
He noted that Abbas's Palestinian Authority supports Gaza with $1.2bn yearly, covering wages of ex-loyalists, social welfare payments and electricity. He suggested Dahlan and Hamas would be unable to cover such sums.
Al-Ahmed also said Egypt had assured Abbas "that they are not going to help any new entity in Gaza".


However, the lengthy negotiations between Dahlan's representatives and a Hamas team in Cairo last month would not have been possible without Egypt's blessing, participants said.
Posted by Tony at 4:50 PM