From The Cheering Section For The Puppet: Olmert: I hope Abbas does not quit before peace talks progress 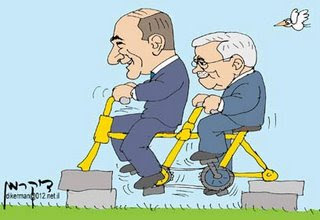 "Prime Minister Ehud Olmert said Wednesday in an interview with The Times that he hopes Palestinian President Mahmoud Abbas remains in his position as the two sides struggle to reach a peace settlement by the end of the year.

Abbas earlier this week threatened to step down unless progress has been made within the six-month timeframe set during negotiations earlier this year.

U.S. President George Bush has called for a settlement to be made before his term ends in 2009, and the sentiment has been echoed by all sides party to the negotiations.

Olmert told The Times in an interview published Wednesday, "I hope he [Abbas] will not step down and I hope that in six months we will be in a different place altogether."....."
Posted by Tony at 5:51 AM