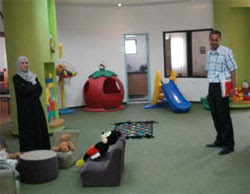 ""What you need to understand about Atfaluna is that for our children, this is not just their school -- for many of them it is their whole life. But we are not able to think about re-opening the school at the moment."

Every day parents call the Atfaluna Society for Deaf Children in Gaza City and ask Suad Lubbad when the school will re-open. Suad is the Administrative Director of the school, which has 275 pupils aged 4-17, and was forced to close without notice in mid-April. Because of chronic fuel shortages, the buses that normally transport the pupils to school were suddenly grounded. Ninety percent of private cars in the Gaza Strip are still off the roads, and taxi rates have doubled in the last eight weeks, so there was no alternative transport for the pupils, who are now stranded at home......

Collective punishment of a civilian population is illegal under international human rights law. However, the fuel crisis imposed by Israel, which is disrupting education in schools across the Gaza Strip, and has hit special needs pupils especially hard, amounts to collective punishment. Schools are struggling with cope with insufficient resources, shortages of electricity, low morale, and a public transport system that simply cannot cope with the overall demand. Suad Lubbad and her colleagues do not know when they will be able to re-open their school. Meanwhile their 275 pupils are being denied their right to an education, and remain stranded at home, waiting......."
Posted by Tony at 5:44 AM