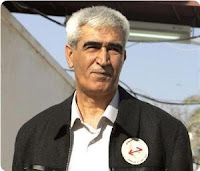 "GAZA, (PIC)-- Ahmed Saadat, the secretary general of the popular front for the liberation of Palestine, has supported Hamas's refusal to abide by PLO commitments as demanded by the Ramallah authority during the national dialog sessions in Cairo.

Saadat, in a statement leaked from his prison cell in the Israeli Askalan prison and made public on Thursday, said that signed agreement were the main reason for the current inter-Palestinian rift.

He pointed out that Israel never gave any importance to those agreements ever since their conclusion, and charged that the agreements did not win national consensus....."
Posted by Tony at 9:09 AM