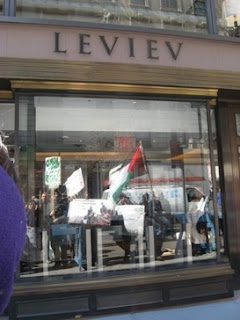 The UK Foreign Office will no longer rent from Lev Leviev. Now other states must also boycott this builder of illegal settlements

"The British Foreign and Commonwealth Office must be commended for its decision to cancel renting premises for the UK embassy in Tel Aviv from the company Africa-Israel, owned by Israeli businessman and settlement builder Lev Leviev. This is an encouraging step that should now be backed by stronger sanctions against the building of the separation wall and the building of illegal settlements by Israel. Furthermore, the governments of Norway and Dubai should emulate the example set by the UK and sever their relationships with Leviev's companies......
While the new Netanyahu/Leiberman government is doing all it can to obfuscate the issue of a proper peace settlement to establish a viable Palestinian state, a clear message must be sent to Israel. The sanctions against Leviev should be the start of a wider boycott of all who profit from the enforced acquisition of Palestinian land."
Posted by Tony at 3:52 AM