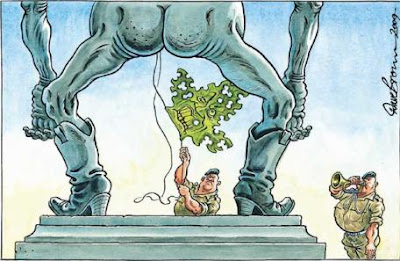 "One hundred and seventy-nine dead soldiers. For what? 179,000 dead Iraqis? Or is the real figure closer to a million? We don't know. And we don't care. We never cared about the Iraqis. That's why we don't know the figure. That's why we left Basra yesterday.....

So let us turn at last to T E Lawrence. Yes, Lawrence of Arabia. In The Sunday Times on 22 August 1920, he wrote of Iraq that the people of England "had been led in Mesopotamia into a trap from which it will be hard to escape with dignity and honour. They have been tricked into it by a steady withholding of information... Things have been far worse than we have been told, our administration more bloody and inefficient than the public knows." Even more presciently, Lawrence had written that the Iraqis had not risked their lives in battle to become British subjects. "Whether they are fit for independence or not remains to be tried. Merit is no justification for freedom."

Alas not. Iraq, begging around Europe now that its oil wealth has run out, is a pitiful figure. But it is a little bit freer than it was. We have destroyed its master and our friend (a certain Saddam) and now, with our own dead clanking around our heels, we are getting out yet again. Till next time..."
Posted by Tony at 3:39 AM